Hi jurgen how are you? Can you tell us more detail about PJD? Probably a history of the band please?
Summer of '89,we all played in bands before and PJD was a direct result of that.We started out as a five piece with two singers but that lasted for one gig only.We went on as a four piece band and that line up lasted till ‘93...

What is Private Jesus Detector mean? How did you guys get stucked with the name PJD?
The name came in a dream of a friend of ours who started out as the second singer of the band,we thought it was funny but at the same time had an underlying meaning to it...anyway it has to do with doubting religion,dissolution and no longer believing in what’s been put forth as the truth,finding your own truth in life without interference from anybody else,sort of... 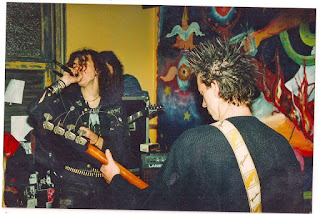 Are any other members’ plays with other bands?
We all played in different bands before and after PJD,Chronic Disease,Barjackers,Suffer Dammage,Katastrophobia,Ravaged,some other for sure butI can’t remember ‘em all.

When did you get interested in punk? How did punk change your outlook on life?
In the mid to late 80’s ,when I heard some HC punk stuff,can’t remember what though  ,but I was hooked, well at least for a couple of years anyway...Then I started listening to other music as well,still like punk though!!Of course it’s more than just the music ,cliché but it really changes your outlook on alot of things,and stays with you ,tho one tends to soften a bit ,I’m less radical than I was with getting older but the fire never dies ,let’s put it that way... 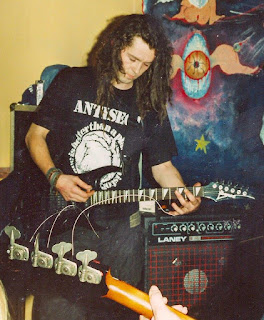 Tell us about punk / crust scene in Belgium, especially in 80’s-90’s?
Brilliant ,all different kinds of bands playing together ,some very engaged people,lots of great bands,lots of fun!!

How about today punk / crust scene in Belgium ?
No idea really,but from what I hear there are different scenes for every genre within punk /HC ,all is categorized and divided ,which is a shame but I’m sure that there are still good bands around ,people organizing stuff etc,perhaps on a larger scale than back then but that’s fine by me (Ieperfest springs to mind). 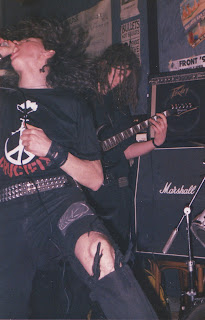 Do you know Disclose from Japan? One of their influences is PJD in early day, did you know that many good crust band today also influenced by PJD in their music?

Of course I know Disclose,a friend of ours was friends with Kawakami so yes I know he liked our band,pretty cool!!!Though I’m not aware of bands being influenced by us,matter of fact it’s a bit weird to hear ...people contact us still for t-shirts ,interviews etc but hey i’m not complaining!.

Do you consider your band as raw hardcore crust? How you describe PJD sound like? And what your lyrics all about?
We just never used labels of any kind to begin with,as they are stigmatising ,plain and simple!Every bill we were on we were labeled as “crust” so it got annoying after a while.I spend a week in Bradford in '91 with Brian Doom and Rich Militia,the “upper” crusties and they laughed at the word “crust”.And to be honest, the reason why I left the scene back then was mainly because I was tired of being part of something that didn't tolerate that you listened to other music,meaning that a scene that is supposed to be open minded is in fact trapped in a narrow minded way of thinking ever,you need to look a certain way to be accepted in a certain genre/scene,and yes we did fit the bill perfectly back then but eventually it got boring to me so I left and stopped wearing bands on my sleeve as it were...anyway everyone should make up their own mind about that, nothing wrong with looking the way you like.About our sound,I can be very short on that ,RAW!!!We played on shitty gear and that’s why we sounded the way we did,nothing more to it.

Did PJD share same stage with Hiatus? If yes, tell us the experience?
We played together many times ,in fact our drummer (Leffe) and the second PJD vocalist (Vrokker)sang for Hiatus for a short period of time .Fun times indeed,I used to sing a Doom cover with them every time we were on the same bill, great band and much better musicians then we ever were, but we haven’t seen each other in ages as they live in the other part of the country (Liege). 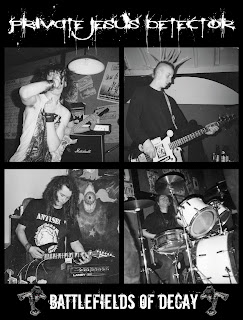 How the feedback you got for s/t cassette released in 1991?
None, we’ll that’s not entirelly true as it was re-released by Nabate, an anarcho distribution label ,who really liked us so it got us a few gigs perhaps but nothing major, it was done really cheap on a four track machine by a friend of ours.

How many sold s/t cassette that time?
I think about 80 or so,we didn’t have enough money back then to buy more tapes ,I also made a complete lyric booklet with photo’s and stuff but not every copy had them,most of the taps were either given away to friends or sold for peanuts at gigs!

Do you listen to any metal band?
Not me but our guitarist has a metal background,though I love bands with a metal influence like Amebix,Hellbastard or Axegrinder,...and if Black Sabbath is metal well then i listen to metal for sure!! I listen to all sorts of music,mostly underground stuff but all genres (except a few of course) I compare music to ice cream,lots of different flavours to choose from!!

Did you believe people still buy physical copy?
We all have huge vinyl collections,I still buy physical constantly but times have changed and the way people listen to music these days is different from what it was,if that’s a good thing or not is up to you,I have my opinion...

How can ‘Battlefields of decay’ compilation CD out? Tell us about it
Well the guy from ‘In Crust We Thrash’ (what a name!!) contacted me a couple of years ago and asked if we would do a cd with everything we had (demo,7” and compilation tracks) I did the complete lay out and that’s how it came to fruition,really thankful for that ,it came out really good plus he did some remastering in a Japanese studio,so it has never sounded better!!

Tell us about ‘Live at the Vortn’Vis leper March 16 1991’ tape?
My memory has decided to wipe that one out I’m  afraid,but telling by the pics it must have been fun,
Vort’n Vis was a great place for bands like us ,gigs on a weekly basis and bands from all over the place(amongst many others there were Disorder, Zygote, Dirt, Nausea, No Security, Doom, Oi Polloi, ...)We were pretty full on live, really went for it if you see what I mean! 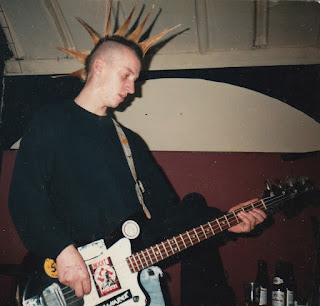 Also tell us about ‘The complete works’ Lp ?
We decided to do that one our selves, it was the first release on our own label ‘Vulle Pulle’ (Full Throttle) It came out with a booklet and the first hundred were on blue vinyl,the rest on black (400) it had a second pressing with a different sized insert.It’s basically the demo and the 7”.

“How evil can one get?” EP anything want to share?
Ah yes,well that was the first and last time we ever entered a “real” studio,fun but recorded in a hurry as we had limited funds back then,we recorded those 6 tracks in one 3 or 4 hour session and the second day we went in to do the mixing ourselves.It turned out ok but it needed more depth and it’s a shame we never got to record the last tracks we did,our guitarist had them on tape but they got lost over the years,some really good tunes on that tho!!Urban Alert did two different versions of the 7”,one with the regular sleeve (525 copies) and another numbered edition of 30 copies with the Christ logo on it,which we knew nothing about,but got hold of them eventually!Also it was recorded in ‘92 but only released in ‘94 due to the sleeve taking up alot of time,so in the end we went for a different design done by Filip Daschot,great artist/painter still to this day!!

Did PJD doing tour?
Well we were supposed to do a tour in the UK,but upon arrival nothing was organized and no one knew anything about it,we had a great time after all (played with Disaster at their rehearsel in the 1 in 12 club in Bradford) met some really nice people but a shame it was a disaster tour wise...We also did a couple of shows with concrete Sox on their tour but nothing more,we only played 25 gigs in our short period of existance!

What you want to do before die?
Live my life I guess...enjoy it to the fullest ,stay true to myself and the ones I love ,most important thing there is i think...

Ok buddy anything else you’d like to add throw it down here! Any last words?
Well for those who are new to PJD and have never heard the band ,here’s the link to our bandcamp page
https://privatejesusdetector.bandcamp.com/releases ,and to our website https://jurgenfiems.wixsite.com/privatejesusdetector .But apart from that,it is really cool that people like yourself set themselves apart from the norm and do their own thing, whatever it may be, believe in who you are, what you represent and what you do, and don't let the bastards grind you down!! 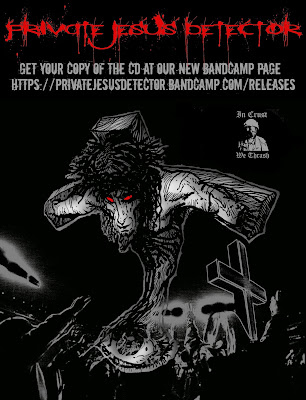