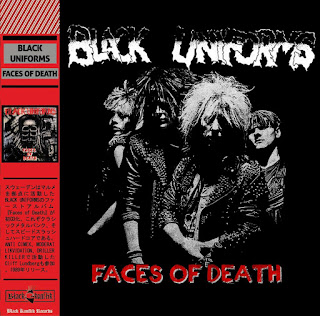 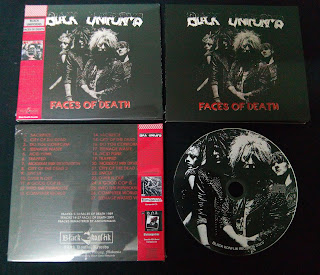 After 30 years since released, Black Uniforms killer 'Faces of Death' is now first time on CD. This CD contains 2 version of 'Faces of death', the original by Hardcore Horror 1989 and 2001 from Splatter Punx On Acid plus 1 extra track ' Teenage Wasted Version'. 27 tracks compilation remastered in 2019 and only limited 500 copies pressing.

"With a mixture of teenage angst and splatter movie lyrics and fast hardcore music it’s hard not to love this band. Black Uniforms was formed back in 1981 and first broke up in 1983, the band didn’t leave much of an impact on the musicscene at that time, a poorly recorded demo and a handfull of gigs and it would take until about 1986 when the band got back together again this time with a change in the line-up. They recorded a couple of demos, one in 1986 and one in 1987 and by the end of 1988 the band wen’t into the studio once more to start recordings of what would become the Faces Of Death Lp." - heavymetalchainsaw.wordpress.com

Place your order at :
www.blacxkonflik.storenvy.com
Posted by Black Konflik Records at 1:48 PM