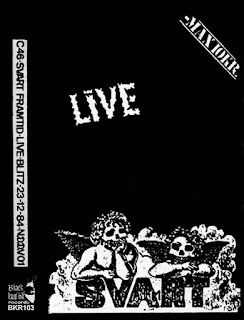 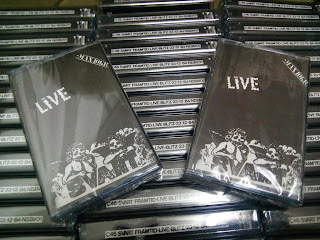 Svart Framtid was a hardcore punk band founded in 1982 in Oslo, Norway. They released only one EP in 1984 which is a highly priced collectors item nowadays and maybe one of the best Norwegian hardcore releases of the 1980s. Svart Framtid split up in 1985. This cassette re-issue from original released by Nar Der Dode Vakmer ( Norway label ) in 1984. This particular recording appears to have been released as a tape back in '84. Seventeen tracks - all the hits from their EP (one of the top 5 hc/punk EPs of all time y'all, seriously), some others heard from compilation tapes, and then some unheard anywhere else! Oh, and a sloppy cover of "Dicks Hate The Police!" too. 17 track recorded live at Blitz, Oslo 23 December 1984 full of raw set and live footage as their memories with rare photo of Svart Framtid. Official re-issue permission by band members to Black Konflik 2018.

"Svart Framtid (Black Future) is regarded as the first one-piece band out of the Blitz-House and they were pioneers because they were the first Norwegian hardcore band that went on international tour. The Band had no bandbil so they bought instead interrail tickets and took the train around Germany from city to city and almost booked gigs along the way. Svart Framtid released only this awesome six-track EP which came out as the first release on vocalist Gunnar Nuven its newly established label Plateselskap and a live tape called "Live Blitz" which was recorded live at Blitz Oslo on 23.12.84. Gunnar Nuven was from the first era of punks in Oslo, he had among others and made his mark as a vocalist in the band Rush. The band dissolved in 1984 and Gunnar Nuven continued in bands like Kafka Process and So Much Hate. Harald Tredal continued in the band Locked Doors and Behind Bars and has also tried acting with a small role in the Norwegian film Schpaaa 1998. Nils Aune continued in the band Four Fæle guys, Kafka Process and Raga Rockers. Anders Eide continued in Behind Bars. This EP has high aggregate value and traded a few times a year for well over a thousand tag on eBay. "Scorching those decibels with an uproarious thrash barrage is Norway's Svart Framtid, jumping from chord to chord with different paces and plucks. Six exciting numbers that focus on major world wide problems, as the crude vocalist screams out in agony, like the people who feel it day after day. Speedy guitar with rapid drum splashings lead Svart Framtid into a hectic dose of creative, yet alarming piledrivers. Great active stuff, the tip of the iceburg in Norway. On X-Port Plater." Pushead, 1984 . 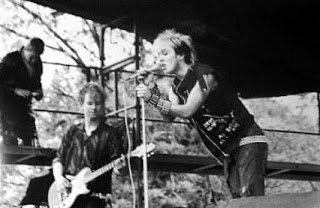 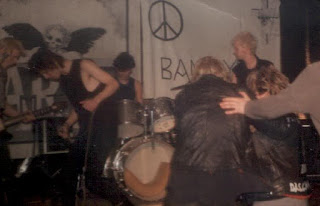