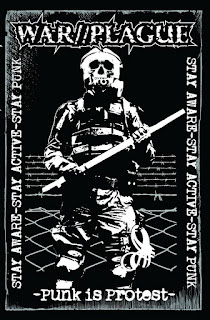 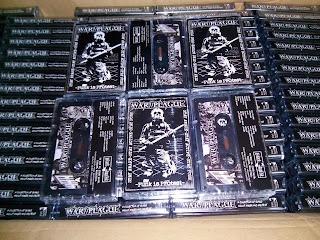 War//plague is a Minneapolis based crust punk, formed from the depths of previous bands Provoked, PontiusPilate, Flux of Disorder, Calloused, Path of Destruction and other punk outfits also now a member of TAU CROSS. this cassette release is a collection of their tracks taken from previous split with AXEGRINDER , split w/ WARWOUND , split w/ VASTATION , 'Carrion' LP , 'Temperament of war' EP, 'Friminal' EP , 'On the darker dawn' LP and 'Smolder' Single.

"Dark, brooding metallic crust punk is what Minneapolis’s War//Plague are all about, bringing to mind such bands as Amebix, Axegrinder, Deviated Instinct, Extinction Of Mankind and fellow Minneapolis crusties Misery – a sound that is as every inch as dark and grim as the images the band’s name and the intro and outro to their debut album ‘On A Darker Dawn’ of swarming flies conjures up, and as harsh and abrasive as a long Minnesota winter.

The band mix up doomy and darkly atmospheric clean guitar driven passages and chugging mid paced riffs with raging punked up distorted aggression with some frenzied lead playing thrown in for good measure, they know how to mix up tempos well resulting in a varied and dynamic aural assault on the ears and their sound continually twists and turns with various metal and crust/punk influences entwining themselves around each other creating a perfectly balanced crossover, a sound that should appeal just as much to metalheads as it does to crust punks." - TERRORIZER.com 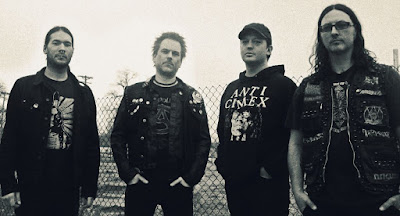