DRILLER KILLER 'and the winner is..' CD 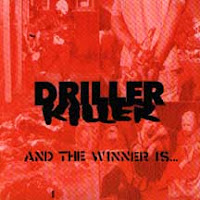 Description : 13 tracks of devastating Swedish hardcore played with unmatched brutality and experience. Thick metal-edged guitars backed by punishing d-beat drumming and extremely harsh low-end vocals courtesy of the bands founder. This album continues to deal out their own brand of raw aggression laced with the harsh realities of life. Pissed off is an understatement...Shit, I just found a new reason that I love these guys. I put the And The Winner Is... cd in my computer to rip the songs, and when I opened the folder, the song titles were all changed. Track 1 Man Overbored comes up as Lion King-Can You Feel The Love Tonight, Track 6 Sliced comes up as The Little Mermaid-Under The Sea, etc. Fucking hilarious. As for the music on this album itself, it is fucking awesome. There's a good mix between simple punk influenced riffing and metal driven breakdowns and solos that the album from becoming too ambient. It's nice to hear a band that doesn't layer a billion fucking guitars over each
Posted by Black Konflik Records at 4:29 PM