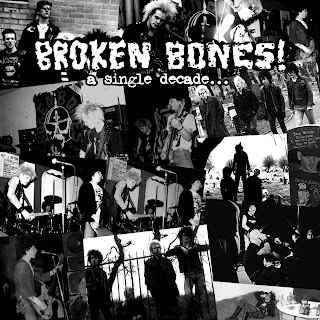 BKRCD040-2009 : BROKEN BONES 'a single decade...' CD
A complete discography of their single album from 1983-1992 including bonus track for Bonecrusher! .
This releases including their previous track from single's Decapitated, Crucifix, Seeing
through my eyees, Never says die, and Religion is responsible! . A new mastering
in 2009. A must have!
A bit description about Broken Bones:
Broken Bones are a street punk and crossover thrash band with a distinct sound that is heavily influenced by other UK82 punk bands such as Discharge, and in later cases, crossover thrash.They are from England and were formed by guitarist Tony "Bones" Roberts in 1983 after he left Discharge. The original lineup was Tony's brother Tezz (also a former member of Discharge) on bass, Nobby as the vocalist and drummer Bazz. Their first single release was the January 1984 "Decapitated". The follow up single "Crucifix" was released in May of 1984. Tezz left the band to join U.K.Subs and friend and roadie Oddy took over on bass. This new line-up recorded the bands first album "Dem Bones", and toured Europe & USA.
Oddy then left to join Conflict, and Tezz resumed bass playing duties, and the F.O.A.D. album was released.
The band then had several line-up changes with Nobby leaving to live in America and Tezz once more departing. Oddy returned to play bass and sing. The band released the "Seeing Thru My Eyes" ep with this 3-piece line-up. Eventually the band ground to a halt.
Bones reformed the band with a new line up of Cliff on drums, Quiv on vocals and Darren "Thrasher" Harris (of Exit Condition) on bass. This is where the band took a more metal turn with their music, releasing "Losing Control". Two more albums were to follow with the 12 inch release "Religion is Responsible" and another album "Stitched Up". After these albums release, the band's touring and recording fell into remission.
In 1998 Broken Bones reformed. Bones as ever on guitar, Quiv still on vocal, Oddy returned to his old berth on bass, and Dave on drums.They released their first studio album in 8 years, "Without Conscience" in 2001 and in 2004, they released "Time For Anger, Not Justice". Both albums bring the band back to their roots as they play the brand of hardcore they're most well known for. They still gig and tour regularly to this day. They were the last band to play before 2006's ill-fated British Invasion concert in San Bernardino was shut down.
Price : RM 15 ( Local ) Euro 8 ( Asia) Euro 10 ( World) including postage paid by air
Mail registered. Cheap wholesale are welcomed.
Posted by Black Konflik Records at 10:36 AM