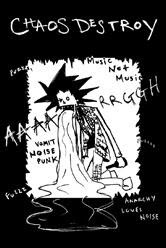 BKR030 CHAOS DESTROY s/t Cassette
Recently increasingly chaotic - like shape has been NOIZUKOASHIN from overseas, Dear JAPANESE PUNX a new challenge has arrived! The name also CHAOS DESTROY! They operate in the United States released by the same American KAMIKAZE NOISE and the split CD-R recordings, Comp recorded tape recordings, and unpublished sources, the editorial board recorded CD-R! Sound direction is the recent arrival of goods by type PISHA KAMIKAZE NOISE! I'll nerve to edge away at the guitar noise DORANKUNOIZU BONBONBONBONKYATCHI and Joe's specialty-base line, and like a rutting monkeys have kicked or walk like an insane screaming vocals are wild-G NDEMO MEGANOIZUKOA of rain in a very special reason! All 14 songs, I listen to the looting will be an important preparation is good? ! CHAOS AND DESTROY! !
Posted by Black Konflik Records at 12:22 AM